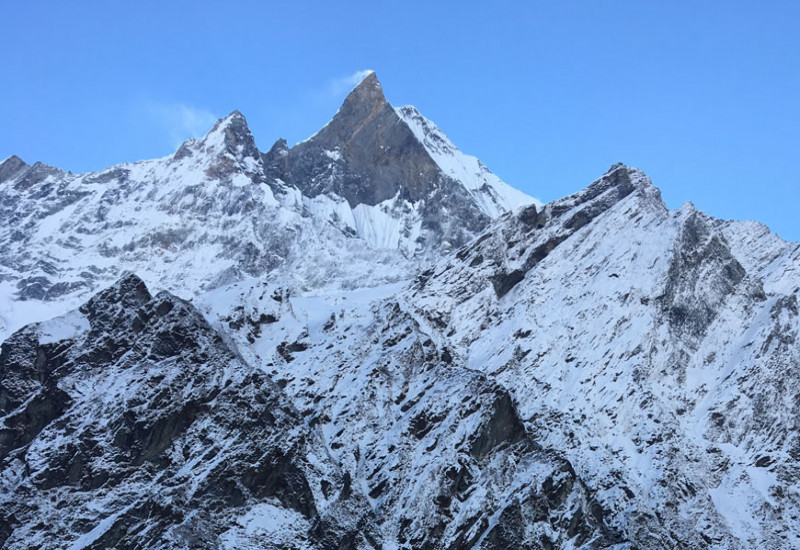 Annapurna Base Camp Trekking also known as Annapurna Sanctuary Trekking has excellent views of peaks such as Machhapuchhre 6,993m, Mt. Annapurna I 8,091m, Mt. Annapurna II 7,939m, Mt. Annapurna III 7,555m, Mt. Annapurna IV 7,525m, Mt. Lamjung Himal 6,986m, Mt. Hiuchuli 6441m, and hundreds of other tiny and high peaks in the Annapurna area. The highest point we will reach throughout the hike is the Annapurna Base Camp, which is 4140 meters above sea level. The trip inside the Sanctuary gives you a sample of the wide range of terrain types that make Nepal such a unique trekking destination. Throughout the approach, there are usually spectacular views of the high peaks to the north, as well as the contrast of rice fields and communities with the snow-capped peaks above, providing for highly attractive trekking.

It is unimaginable that eight thousand will take you on a journey that is just somewhat difficult. The fascinating Annapurna range has the world's tenth-tallest mountain. Annapurna is nearly fatally attractive to mountain climbers. In this scary and solitary environment, the ABC journey contains some fortunes for the mountain's attraction. The natural aquifers on this route are distinctive features. Subtropical temperatures, charming towns, and nicely terraced rice fields are all met upon leaving Phedi. Gaining altitude gradually, you may take pleasure in many days of lovely ridge walking with a mixture of dense woodland and sporadic farmland. The valley narrows at the entry to the wonderland of ice and snow that is the Annapurna Reserve beyond the last of the bamboo and rhododendron woods.

You'll enjoy stunning views of the valley, the Himalayas, and the terraced farms below as you take off for Kathmandu. After clearing customs, a representative will be there to help you check into your hotel and navigate the initial cultural shock of Kathmandu's twisting, winding streets. After you've settled in, go explore one of Kathmandu's cultural attractions. The evening is a nice time to eat, and Thamel, a popular tourist destination, offers a wide selection of eateries serving both Western and regional Nepali cuisine.

When the city is gently waking up in the morning hours and isn't yet too hectic, Kathmandu offers a unique environment, a perfect time to stroll and explore the neighborhood, or to enjoy while gazing out over one of the durbar squares or neighborhood courtyards. There are plenty of breathtaking attractions in and around the Kathmandu Valley, there are numerous ways you might spend the day. Following evening, go out to eat at one of the city's top restaurants, or your specialist may set up supper at a local family's house.

Pokhara is accessible by either a short flight or a short bus ride. Your guide will meet you at the airport and accompany you to your Pokhara accommodations. You can complete all trekking preparations. In the city of Pokhara, you may purchase hiking equipment. If you have time, you may also explore the city of Pokhara.

After roughly a half-hour drive, you will arrive at the Phedi hike starting location. Today's trek ascends through rhododendron, magnolia, oak, sandalwood, and pine forests until you reach the hamlet of Dhampus. This is an actual Gurung village from where you can enjoy amazing views of the Annapurna ranges as well as noteworthy peaks such as Lamjung Himal.

Through bamboo trees and remote farmsteads, the route now climbs very steeply, high above the river. On this arduous, scorching climb, the teahouses at Jhinu offer a pleasant opportunity to pause for a drink and a break. You will reach Taglung and Chomrong shortly after as you continue up a treeless mountain. It is possible to see Annapurna South and Machhapuchhre in great detail from this Gurung settlement.

From Chhomrong to Dovan, the journey takes roughly 5 to 6 hours. It's just a lovely uphill trek; the route isn't particularly difficult. You may follow the lovely bamboo, rhododendron, oak, etc. forest from Chhomrong. You will then descend to the village of bamboo before continuing up the canyon's side on a trail that passes through dense bamboo and rhododendron forests. Spend the night at Dovan.

It only takes 3–4 hours to go to the Himalaya Hotel from Dovan. You descend a stone stairway into a very dense bamboo forest after leaving the town of Khuldigar to reach the "Bamboo Lodge" community. To reach the Himalaya Hotel at the end of the day, you must climb steeply through a bamboo and rhododendron forest.

From this point on, the valley expands and the vegetation becomes sparser. As one ascends to Machhapuchre Base Camp, one can even feel the thin air. You soon arrive at a fire-blackened overhang that has been walled in to create a little lodge after a long climb. Hinku Cave is the name of this location. As you draw closer to the Sanctuary's entrance, the route continues to ascend. You reach Machhapuchhre Base Camp, a flat, grassy moraine platform, after passing the lodges at Deorali and Bagar.

After waking up and eating breakfast in Machhapuchre Base Camp, you'll depart for Annapurna Base Camp. Any live plant observed in earlier days will most certainly be replaced by snow, rocks, and stones. Dress warmly and take the path slowly to allow your body to adjust to the greater elevation. As you approach the Annapurna Sanctuary, the trail expands, passes a creek, and then continues uphill. You'll be rewarded with unimpeded views of Machhapuchhre, Annapurna South, Annapurna I, Hiuchuli, and other peaks towards the end. We travel down to Bamboo after viewing a panoramic vista of the Himalayas from the base camp. Bamboo is about a 5 to 6-hour trek from Annapurna Base Camp.

Tadhapani is about five and half hours away. There is no water source on the route from Chhomrong to Tadhapani. On the way, you will be treated to spectacular views of peaks such as Annapurna South, Himchuli, Gangapurna, and Machhapuchre. Tadhapani is also well-known for its golden sunrise views.

You will trek from Tadhapani to Ghorepani. Ghorepani is approximately 5 hours away. You'll be spending the night in Ghorepani. The trail descends through rhododendron forest to a stream before climbing steeply to Deurali, from which you can see spectacular views of the Himalayas, including Dhaulagiri (8167 m). Then we go down to Ghorepani.

You can see the magnificent Himalayan scenery, including a panoramic view of Mt. Dhaulagiri (8167 m), Nilgiri (7041 m), Machhapuchre, Annapurna I, Annapurna II, Annapurna III, Annapurna IV, Annapurna South, Hiunchuli, etc., by hiking to Poonhill (3210 m) in the early morning. Poon Hill can be reached from Ghorepani in an hour. You will then continue our trek to Hile while returning to Ghorepani. To get to Hile from Ghorepani, it takes 5 hours.

You might have time to do more sightseeing, unwind, or visit one of Pokhara's coffee shops after breakfast. You'll be picked up from your hotel and driven to the domestic airport in time to board your flight back to Kathmandu, which departs about 1.5 hours later.

You will be driven to your hotel in Kathmandu where you can spend the rest of the afternoon and evening at your leisure. Take a rickshaw, bicycle, or foot tour through Kathmandu's streets to see anything you might have missed at the start of your trip or to look for souvenirs. Choose from a variety of Nepali, French, Vietnamese, and Middle Eastern dishes in Kathmandu in the evening.

Time to say farewell to Nepal. Enjoy your last moments in Kathmandu with breakfast in a café, a city stroll, and/or souvenir shopping. A representative will meet you at your hotel and drive you to the airport for your return flight home. It's good to be at the airport at least two hours prior to departure.

Weather at Annapurna Base Camp

Since each season offers a unique experience, you must carefully consider which season is best for climbing Annapurna. Throughout the year, the region experiences a wide range of weather conditions, including freezing temperatures and strong winds. The peak is much more visible due to the typically bright, clear, and cloudless weather. The coldest months of the year are December through February when temperatures can drop below zero degrees Fahrenheit even during the day.

Altitude at Annapurna Base Camp

Packing advice for Annapurna Base Camp

Throughout the year, the base of the magnificent Annapurna Mountain is quite cold. This trek will take you to an elevation of 4130m. And the ABC weather at such a height is frequently unpredictable. Packing the proper equipment and clothing is critical to ensuring a pleasant and comfortable trekking experience. Despite the difficulties of the ABC trek, packing wisely can make a significant difference in making the trek less difficult.

Cultural Advice for Annapurna Base Camp

The architecture, languages, dialects, customs, and even clothing of the Himalayan people are all diverse. There are a variety of ethnic groups represented among the residents along the Annapurna Base Camp Route, including Mongoloid Himalayan people in the Himalayas and Brahmans and Chhetris in lower elevations. Most of the locals are Gurung and Magar, two ethnic groups known for the Gurkha regiment. One of the largest villages in this region is Ghandruk. The Gurung village is very welcoming and impressive. You can easily explore the Gurung Museum, its customs, and its way of life.

In some locations, you will have adequate internet access, but it will cost you Rs. 200 per day. There is no guarantee that towns will have quick and easy access to the internet. In the event of an electricity outage, internet access might be slow or cease entirely. You can buy two SIM cards for internet access and you may call family members and our officials in need with the help of these SIM cards. Carrying extra camera batteries is advised if you plan to take photos and videos about your trek to Annapurna base camp. Do not rely on ABC's electricity.

Money and Currency in Annapurna Base Camp

It's common to forget about the money spent in the host country when planning vacations or excursions. The national currency is the Nepalese Rupee, also known as NPR. While trekking in Nepal, it is best to use local currency. In major cities like Kathmandu and Pokhara, there are numerous banks and money exchanges to obtain it. Convert enough cash into rupees to last the entire trip. Although there are ATMs in Namche Bazaar and Lukla, they are both unreliable. Both websites accept cash, but the exchange rate is much less favorable than on KTM.

Health tips for travelers in Annapurna Base Camp

Acute Mountain Sickness (AMS) is a distinct possibility in this situation. Anyone above 8000 feet will be affected, with higher elevations often experiencing more severe effects. Because the ABC Trek ascends to elevations more than twice as high as those where AMS may occur. Drinking plenty of water as an additional strategy to combat AMS is likely to be recommended by your Annapurna Base Camp Trek guide. You can usually count on your guide to having a supply of oxygen on hand in case you need it once you reach the higher altitudes of the trek. You should also bring Diamox or another AMS medication to ABC. 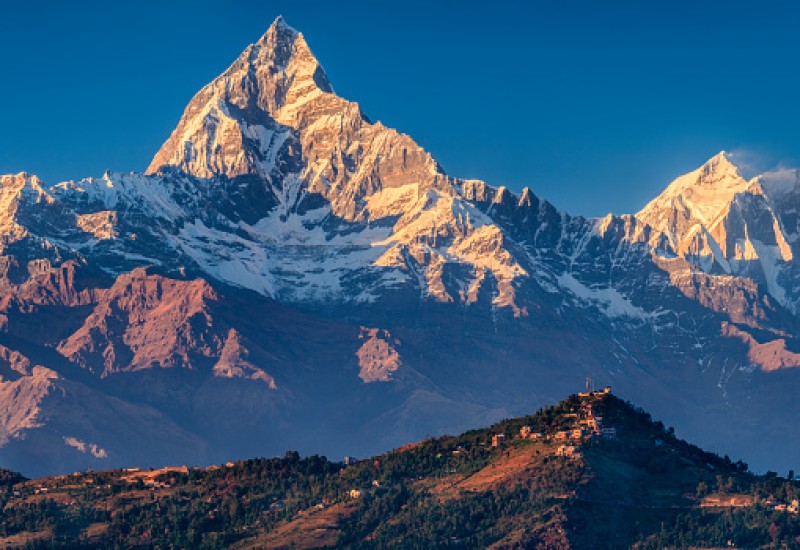