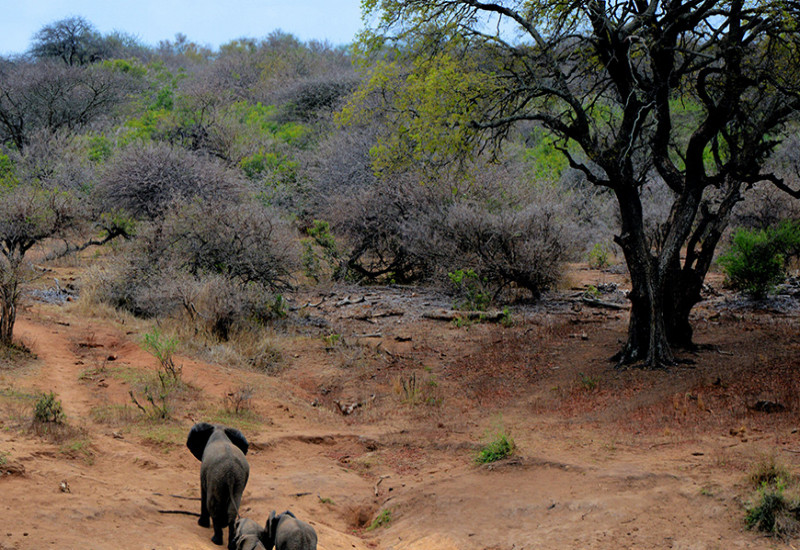 The southern Kenyan town of Amboseli is well-known for its elephant herds and vistas of Tanzania's snow-capped Mount Kilimanjaro, which is visible from there. The two attractions make for fantastic photo ops. Along with elephants, other animals found in the park include hippos, buffaloes, giraffes, wildebeests, and zebras. The park is made up of a combination of marshes, wooded regions, and open grasslands. The wide variety of species here, including kingfishers, herons, pygmy falcons, and secretary birds skulking through the grass, will not disappoint you.

Unlike its neighbor Amboseli, Tsavo West National Park, which is characterized by forest, volcanic hills, and lava flows, Tsavo East National Park is Kenya's largest park and is famous for its elephant herds. The Mzima Springs, where a nature walk leads to an underwater observation chamber from which you might be able to watch hippos, is a key draw in this area. Similar to Tsavo East, this area is home to enormous populations of elephants, lions, giraffes, buffalo, and many types of antelope.

Day 1:Arrival and preparation for Amboseli-Tsavo

On the first day, a flight will take you to Jomo Kenyatta International Airport. Our representatives will be waiting for you right here. After that, you may drive to your accommodation in Nairobi. Your coordinators will appropriately introduce you to the other group members. At orientation, you'll learn more about your program. Prepare for your trip so that you may take a stroll near your host family or rest for the evening.

After breakfast, you will depart for Amboseli National Park. This is located near the base of Mt. Kilimanjaro, Africa's highest peak. Every element of Amboseli is dominated by the snow-capped top of Mt. Kilimanjaro soaring above a saucer of clouds. Lion, elephant, leopard, rhino, cheetah, buffalo, and a host of other plains game make Kenya, a sought-a paradise. The snows of Mt. Kilimanjaro, white and crystalline, provide a stunning background to one of Kenya's most outstanding wildlife displays.

After breakfast the next day, you will go on a safari in Ambosli National Park. The park is also home to the Maasai, those towering, proud nomads who have learned to coexist peacefully with the wildlife that surrounds them. You will spend the night at your lodging, where all meals will be served. The entire day will be spent game viewing in and around Amboseli.

Tsavo National Park is the next stop after Amboseli National Park. We will depart Amboseli as usual after your morning meal. Tsavo East and West together make up one of the largest game sanctuaries in the world, bigger than Wales in Great Britain. You'll get to Tsavo West in time for a game drive in the evening. One of the most amazing features of this park is the Mzima Springs, which is a haven for a diverse array of wildlife, including elephants that are partially submerged in the water, hippos that appear to be weightless and tiptoe across the bottom, crocodiles that are basking on the bank or swirling through the water, gazelles, zebra, and giraffes that wander around the banks through the dense acacia and raffia palms,

Day 5:Safari in Tsavo National Park
After breakfast, you'll spend the rest of the day on safari, much like Amboseli. The first lodge constructed inside the National Park, Kilaguni, is where you will spend the night. Game watching will be done in Tsavo West the next morning before you go to Tsavo East, where the Yatta Plateau, one of the world's longest lava flows, is the primary draw. The Lugard Falls, a long length of rippling white water cataracts and a preferred site for sunbathing crocodiles, are a long stretch of rippling white water waterfalls that subsequently create the Athi River, which is surrounded by majestic palms.

Before breakfast this morning, take a tour. After that, go back to the camp for a hearty breakfast. The journey will soon conclude when we head back to Nairobi. After visiting Nairobi, you are free to go about the city or return home.

Weather of Tsavo
Hot and arid conditions define the climate of the Tsavo National Park. Even in the rainy season, the days are still warm, and even in the dry season, the nights are still chilly.  During the long and short rains, respectively, the peak months for rainfall are April and November. Short, heavy showers are the norm when it rains. In contrast, the dry season begins in June and lasts until September, then again from December to February.

Altitude of Tsavo
The topography of Amboseli-Tsavo is higher than that of any other place in the equatorial area. The Amboseli National Park is located near the Tanzanian border, just to the northwest of Kilimanjaro, and is mostly located at an elevation of more than 1,180 meters. Approximately 392 square kilometers are occupied by Amboseli-National Reserve, whereas 13,747 square kilometers are occupied by Tsavo, one of Kenya's oldest parks.

Packing advice for Tsavo
If you are going on a safari ride, you will require the following goods. You may bring cell phones and cameras if you enjoy taking images. Packing is one of the most difficult aspects of traveling, and planning for a trip to an equatorial area can be extremely difficult. You'll need more than a few t-shirts and swimming suits for the wide range of heights, temps, and activities. Travelers should constantly be mindful of the season in which they are going since the weather can drastically shift from one season to the next.

Cultural Advice for Tsavo
The region's population is primarily made up of primitive aboriginal tribes. The Masai tribes constitute the bulk of these tribes. Their culture is very much alive. They adhere to a variety of dietary, social, and ceremonial routines. Traditions, rituals, history, and the way people relate to one another are all important sources of tourism in Amboseli-Tsavo. The Masai traditional dance and their unusual look are well-known aspects of their culture. In addition, the region is well-known for its unique way of life.

Communication in Tsavo (phone, internet)
When traveling, there are several methods to remain in touch. There should be ample notice that none of them will behave in the same manner as they do at home. However, almost every lodge has internet access up to a certain height. Their hourly rates vary depending on your location. There are telecom firms that provide 4G services throughout the country. Because there are so many ISPs, Wi-Fi is available practically everywhere the rest of the way up the slope. To discover more, go to the ISPs' websites. A lot of the hotels and establishments along the route provide usernames and passwords on their websites.

Money and Currency in Tsavo
It is difficult to find a money exchange facility because it is a developing country. Money changers and banks are available in Nairobi for currency conversion. Banks provide somewhat better conversion rates than money changers, but more documentation is necessary. Please bring your passport with you. A copy of your visa is also required. Make sure you received the proper amount. It is vital to constantly do a proper analysis of the money received. Aside from that, money changers are available in Masaai Mara. Other currencies are used, however, it is better to do transactions in the local currency.

Health tips for travelers in Tsavo
When traveling, you should take extra precautions to protect your health. You will surely be fed nutritious meals while on your trip, but you are still responsible for your own health. Eat meat only if you know what you're doing. Please contact our agent if you are having trouble with your regular diet. You might also ask the host family to cook dinner for you. Because some pharmacies may not have the necessary prescriptions, you should always bring your medications with you.